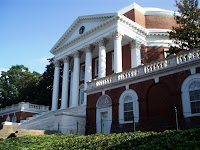 As a local Charlottesville newspaper, The Hook, reports:

Four years after the college safety nonprofit Security on Campus filed a complaint against UVA for its mishandling of sexual assault cases, the Department of Education has ruled that the university has, in fact, violated federal law by threatening victims of sexual assault with punishment if they spoke about their cases.

The ruling has major implications for victims of sexual assault on college campuses across the country, according to the man who filed the complaint on behalf of then-UVA student Annie Hylton, now Annie Hylton McLaughlin.

“It means that victims can’t be silenced at UVA or anywhere else,” says S. Daniel Carter, director of public policy for Security on Campus.

As a student and then graduate student at the University of Virginia, I was bothered by the university's Sexual Assault Board and its rule that victims of sexual assault keep silent about their cases -even if their attacker was found guilty. Sometimes, as in the case that prompted the complaint against UVA, the defendant was found guilty but allowed to stay at the school, and the victim was still bound by silence. If she spoke about the case, she could face charges from the Judiciary Committee. I am glad that my alma mater will now be a better place for students.

You can read more about the case and the ruling at The Hook, and the article is very interesting - be warned, though - some of the comments are revolting. Also, thanks to Noticing the Gap for leading me to this story from the town I consider to be my home.

UPDATE: Policies like UVA's are not uncommon. You can check your school's sexual assault policies at SAFER (Students Acting for Ending Rape).
Posted by habladora at 9:06 PM

My alma mater in CA had a similar approach which often resulted in punishing the victim and protecting the alleged rapist. I hope this ruling is a starting point for remedying that.