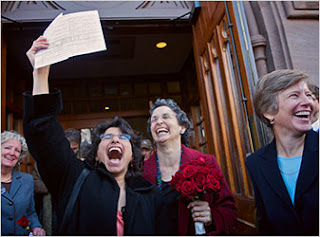 It's a happy day in the nutmeg state! As the New York Times reports:

Bunches of white balloons and giant sprays of long-stemmed red roses festooned City Hall here Wednesday morning, as one of the eight couples who successfully sued the state to allow same-sex marriage became the first to obtain a marriage license as the law took effect...

The official start of gay marriages came a month after Connecticut’s highest court legalized the unions, and the court announced only last week that Wednesday would be the official first day of nuptials...

“Today, Connecticut sends a message of hope and promise to lesbian and gay people throughout the country who want to be treated as equal citizens by their government,” said Ben Klein, a lawyer with Gay and Lesbian Advocates and Defenders, a Boston group that litigated the Connecticut case.

Cheers! Congratulations to all the couples that can now begin planning weddings. I hear Connecticut is beautiful in the early summer... May many states (ahem, CA) follow the example of our northern friends and keep fighting until equal rights for same-sex couples are guaranteed throughout the country.
Posted by habladora at 1:08 PM

yeay! i am so proud of my state :) Now for the rest of the country to follow in CT's lead...