Mini-Rant: Women are Not Interchangeable

You know what's sexist? Implying that women are completely interchangeable by acting as though you could substitute a Sarah Palin for a Hillary Clinton and no one would notice. It is assumed that voters can choose between two white male politicians - their individuality is understood; and it goes without saying that any two male candidates are different people with different ideas that appeal to different kinds of voters. So, for those of you out there who want to call my feminist credibility into question for not voting for 'a woman candidate' - being able to recognize that not all women are the same, just like not all men are the same, makes me more feminist, not less. Yes, I would have been proud to vote for Hillary Clinton and no, I'm not voting for Sarah Palin. And for those trying to maintain that there is some sort of illogic to that, you need to ditch the premise that all ladies are the same - that attitude makes you sexist.

As for the idea that the election of Palin would shatter the glass ceiling, I think this sums up my thoughts on that argument pretty nicely: 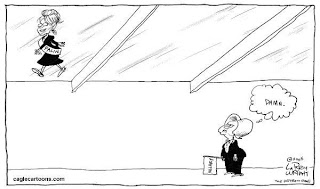 For an in-depth (and brilliant) analysis of the above cartoon, visit Ann. For more on why most feminists aren't voting for Palin, you can find some really solid reasons here and here.
Posted by habladora at 11:53 AM

Thanks for the additional comics - we should be collecting them, or drawing a few of our own...